For more than 70 years, NDSU Team Makers has been leading the fundraising effort to enhance the student-athlete experience.

NDSU Athletics has a long tradition of excellence. That excellence is present in competition, the classroom, and the community. In 1950, a group of local business leaders formed Team Makers, a non-profit fundraising organization to raise money for student-athlete scholarships. Since then, Team Makers has been uniting Bison fans and inspiring philanthropy to enhance the student-athlete experience at NDSU.

“It’s evolved a bit to not just scholarships but improving the student-athlete experience in any way we can in terms of facilities, academic support, and travel,” Derrick Lang ’13, NDSU associate athletic director and Team Makers executive director, said.

Since the start of In Our Hands: The Campaign for North Dakota State University in 2016, Team Makers has raised $41.9 million to support NDSU Athletics. Dollars from Team Makers fund scholarships and cost of attendance — financial support on top of tuition and room and board to cover the full costs of college attendance — for athletes in all 16 sports, which is something Derrick said is rare at this level of college athletics. That attention to the student-athlete experience is something that stood out to Emily Dietz ’21, ’24, a forward on the women’s basketball team. She said the support from Team Makers is unlike anything she experienced touring other schools during the recruiting process.

“When I toured NDSU and got to see the support around the program from athletics, the administration, and the school as a whole, I knew it was home,” Emily said. “Just to have an organization like Team Makers that backs up a school the way that they do is something I didn’t find comparable in any other school. Team Makers is an incredible group that makes what I do every day possible.”

Each year, the fundraising resets to zero, and Team Makers must rise to meet the $4.5 million tuition bill from the University again. Those dollars come from annual donations, season ticket sales, gaming, and memberships. The organization relies, in large part, on volunteer fundraisers like Jim Hambrick ’87 and Sherri Schmidt ’83 who have each supported Team Makers for decades and encourage other individuals and businesses to get involved.

“If you’re going to wear the colors, it’s important to support the program financially; success doesn’t just happen, growth happens with investment,” Sherri, Team Makers fund drive chair, said. Sherri has, along with her husband, Paul Tefft, established an endowed scholarship. “There are so many parts to our Bison tradition and our systems, and every dollar is vital to success.”

“In the everchanging world of athletics, you need better facilities and really quality people — not only coaches but also those helping student-athletes in the classroom. That takes time, it takes money, and it also takes enthusiasm,” Jim, Team Makers investment chair, who also has an endowed scholarship with his wife, Naomi, said. “I hope when student-athletes come on campus and check out NDSU that they appreciate there’s a huge fanbase, mostly in the form of Team Makers, that support them.”

Team Makers support doesn’t go unnoticed by Bison student-athletes. Emily, originally from West Fargo, North Dakota, takes notice of the Team Makers stickers she sees in windows of cars and businesses around the community. Being a local student-athlete, she’s also had the unique opportunity to play in the Bison Sports Arena (BSA) and the Sanford Health Athletic Complex (SHAC) — a $50 million extension and renovation to the BSA completed in November 2016.

“Our gym is arguably the best in the upper Midwest that I’ve ever seen or played in. It’s such an extreme blessing to be able to have these facilities as an athlete and as a program. It would not be possible without them,” Emily said.

Both Jim and Sherri praise NDSU Athletics’ recruiting process, and they’re proud of the caliber of student-athletes at the University.

“We have met some of our scholarship recipients and they’re so outstanding — their demeanor, their attitude, the work ethic,” Sherri said. “Every time we meet one of them, we’re really inspired that there are great people coming out of this university.”

“Being a college athlete takes a lot of time and a lot of effort and energy,” Emily said. “To have that support has been incredible and has allowed me to grow in ways I didn’t think I ever could.”

To learn more about how you can help support Bison student-athletes, visit the Team Makers website at NDSUAlthleticFund.com. 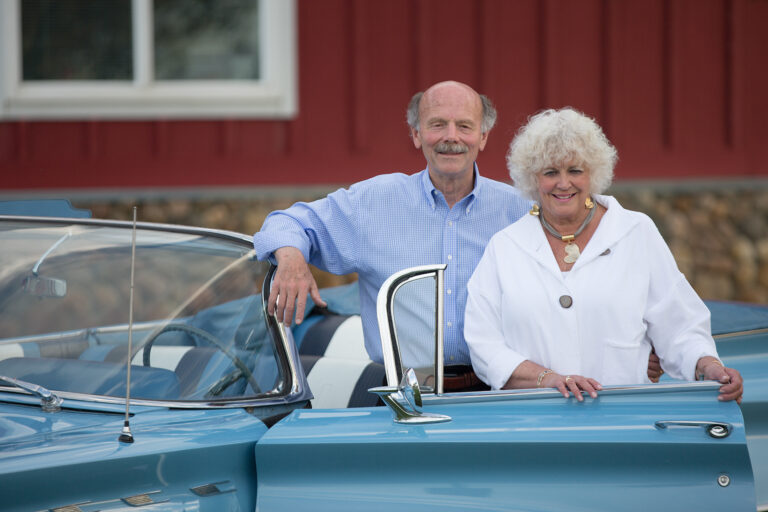